Heritage Mutual Insurance Company was designed in 1982 when Mr. Kronenberg was a senior designer at Skidmore, Owings, and Merrill in Chicago under the guidance of Bruce J. Graham, FAIA, and Dr. Fazlur Khan, the designers of the Sears Tower and John Hancock Building in Chicago. Peter Walker, Chairman of the Landscape Architecture Department at Harvard Graduate School of Design was the Landscape Architect. Our initial approach to the design of the building was strictly utilitarian. First we investigated a highly efficient plan which inevitably resulted in a rectangular two-story box. Secondly, to minimize the amount of costly exterior wall we made the box square in plan and cut an atrium through it with clerestory windows it to let light into the office areas deep within the building. The atrium we cut looked very much like the covered walking streets found in Europe, so we named it the Galleria. Recognizing that the building was starting to resemble a small town distributed on two levels, we reinforced the similarity by cutting cross streets perpendicular to the Galleria and placed important functions at the intersections such as stairs, reception areas and conference rooms. Beyond these intersections along the crossroads are support services, toilets and the fan rooms that are located on the perimeter to draw in plenty of fresh air. On the second floor the remaining space was devoted to open office areas that are arranged like a traditional town in a grid of streets and paths that lead to each workstation.The inspiration for the design of the Galleria comes from the structure of the beautiful dairy barns that dot the landscape throughout Wisconsin. Natural materials are employed throughout the building to humanize the workday environment.

The landscape plan for the property further emphasizes the axial nature of the Galleria with a row of trees planted from the visitors’ automobile entrance all the way to the lake we designed, interrupted only by the building. Pete Walker conceived the parking lots as an orchard with low spreading trees sheltering the cars from the summer sun. Between the rows of cars are grass strips designed to accommodate the piles of snow that accumulate during the harsh winters. Out by the lake is a grassy area and at the end of the axis, a gazebo for the employees to get away from the office and have their lunch. 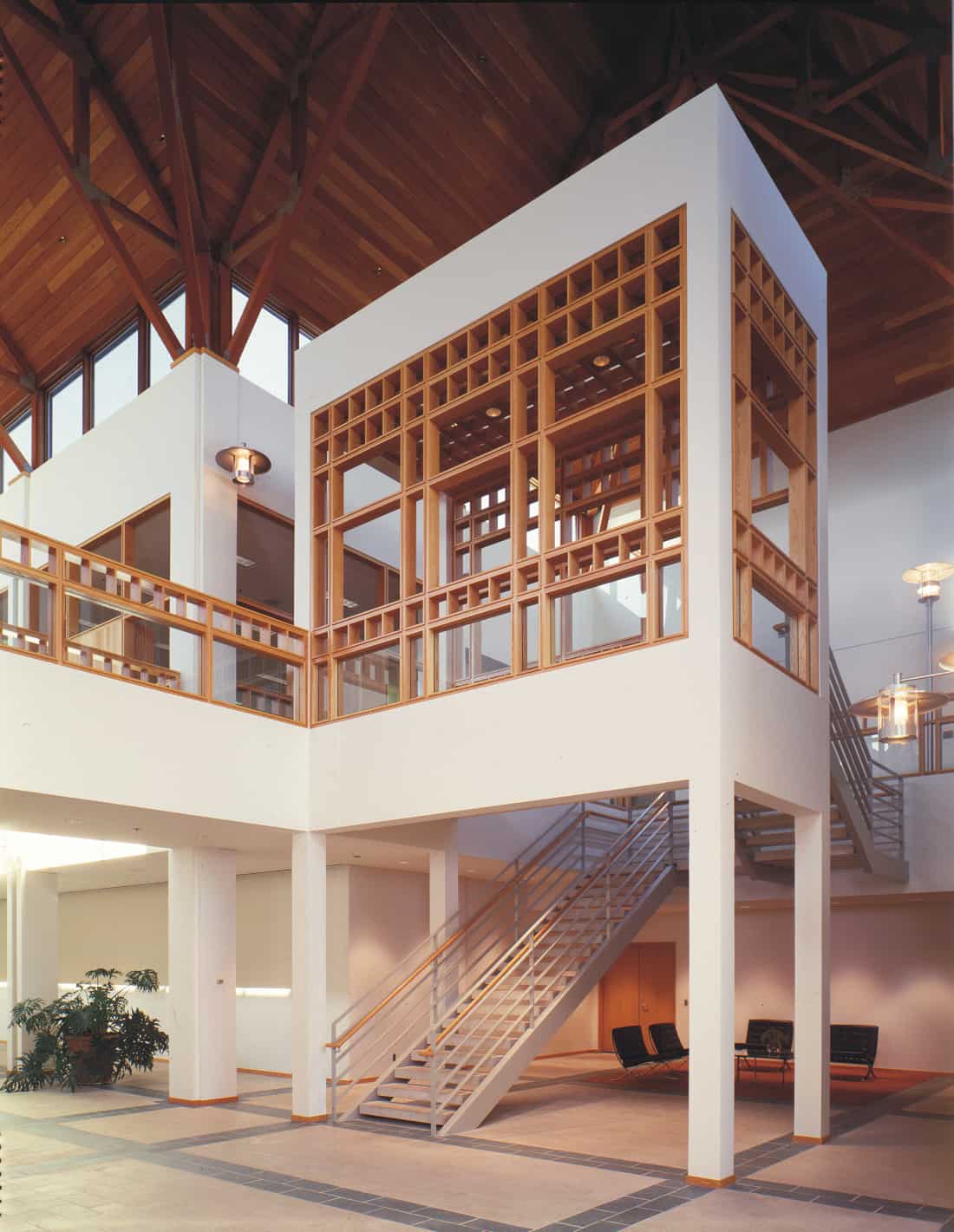 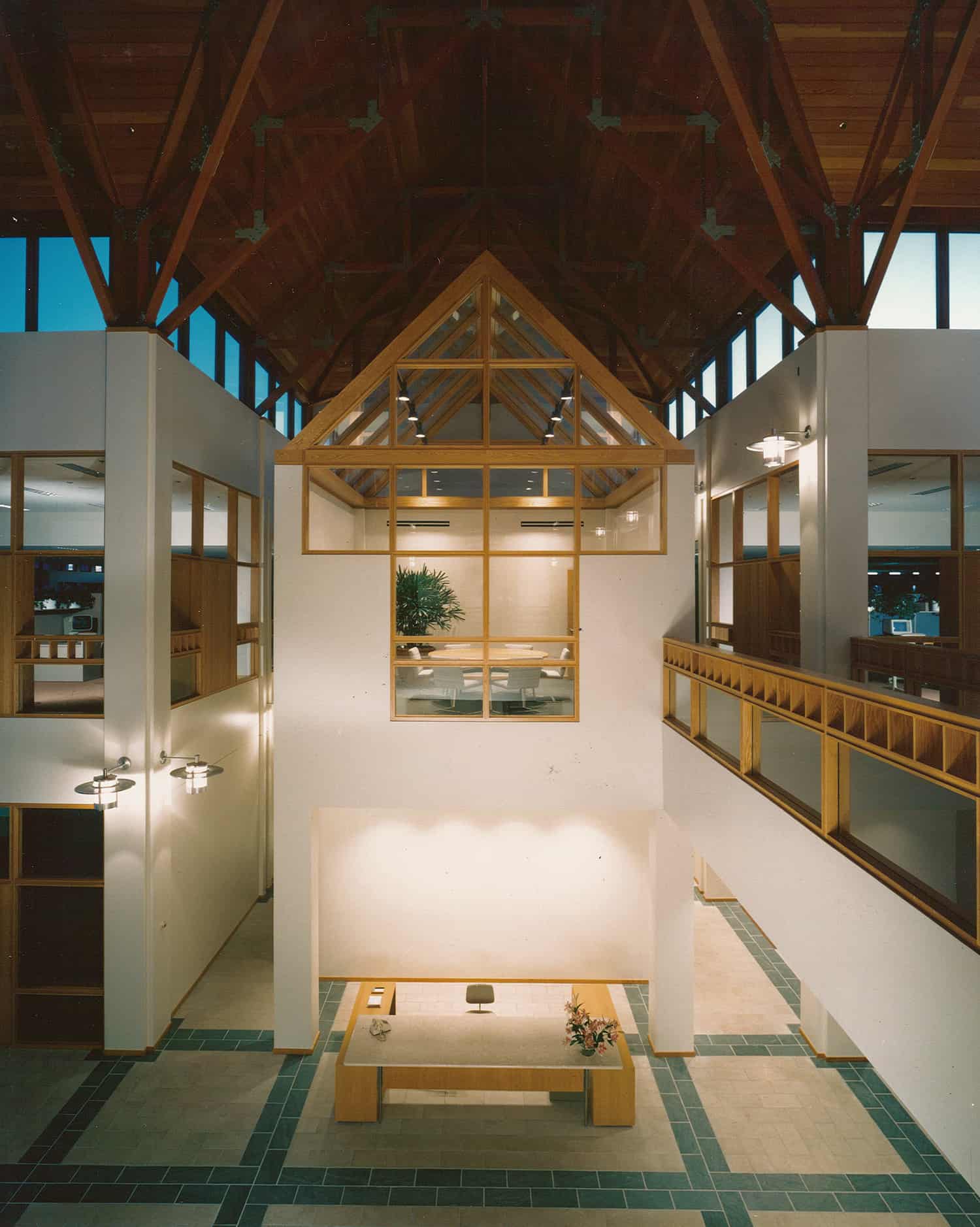 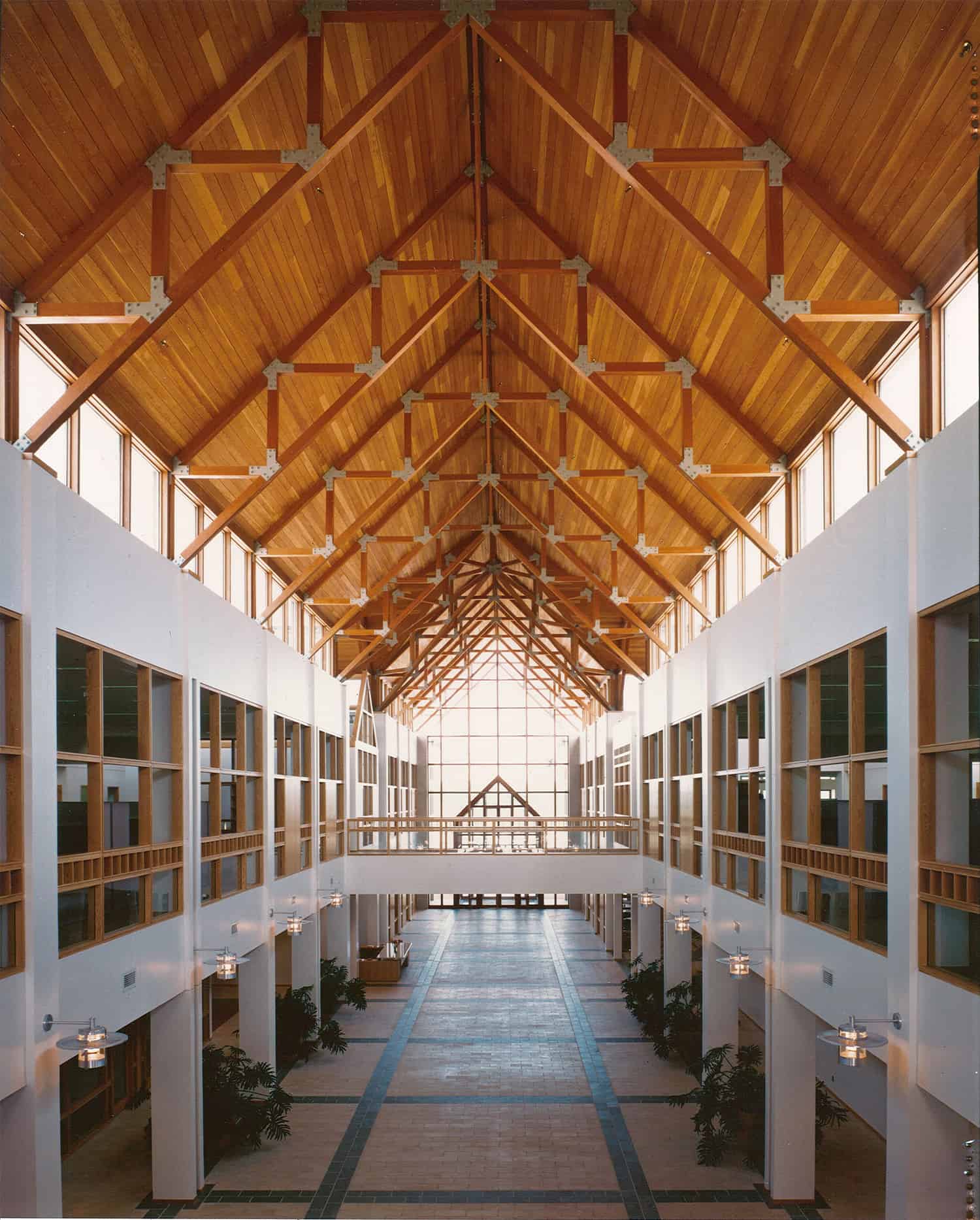 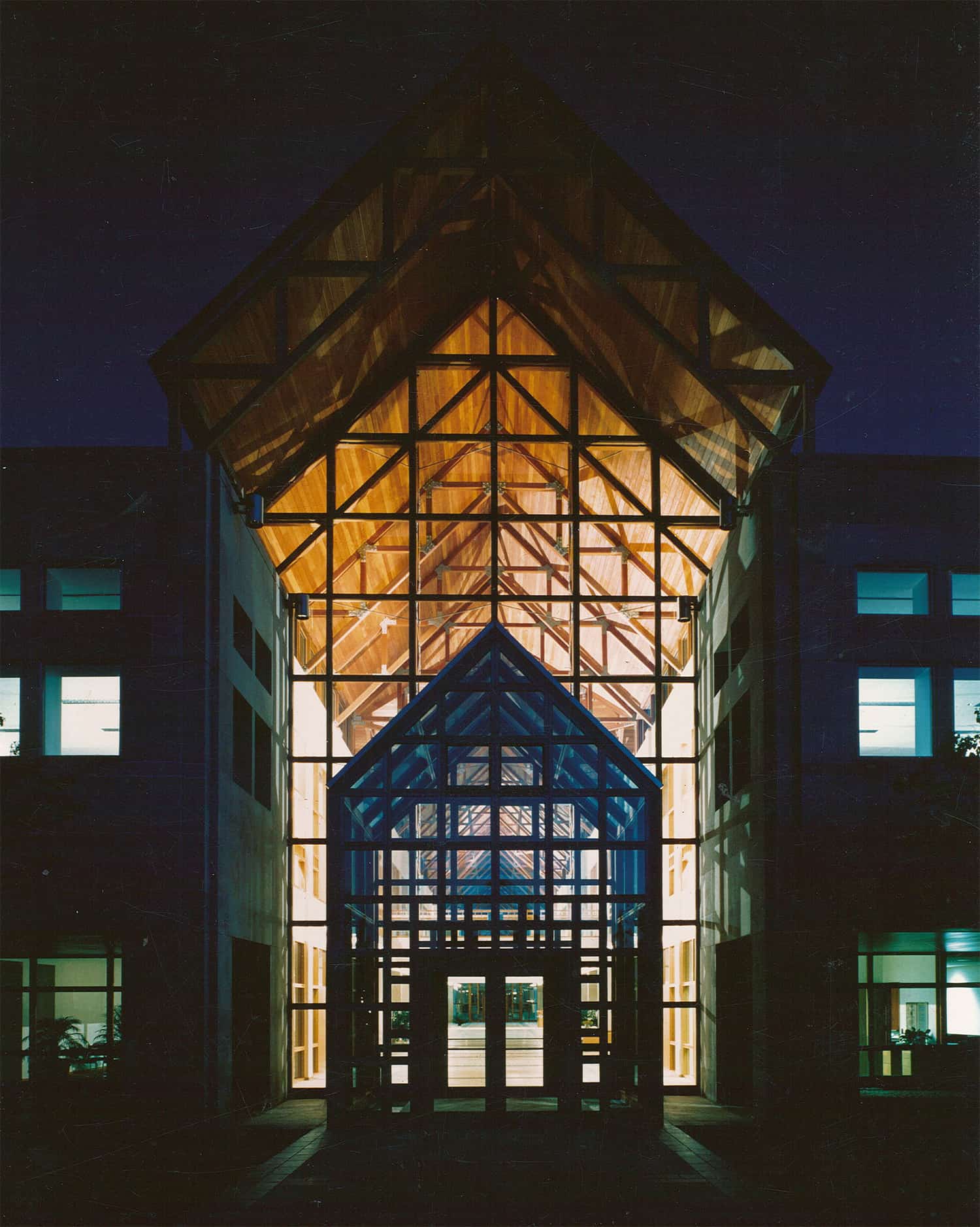 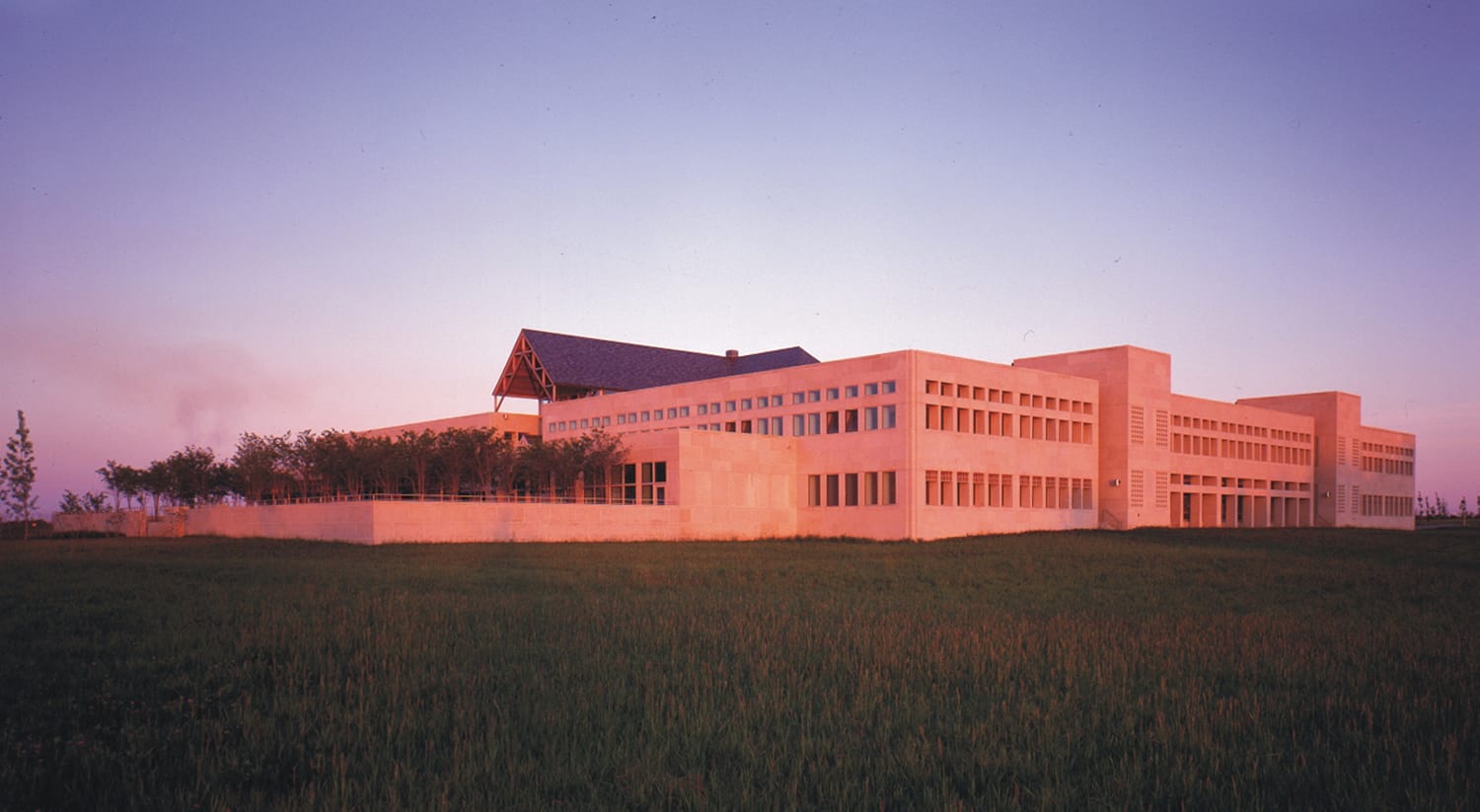 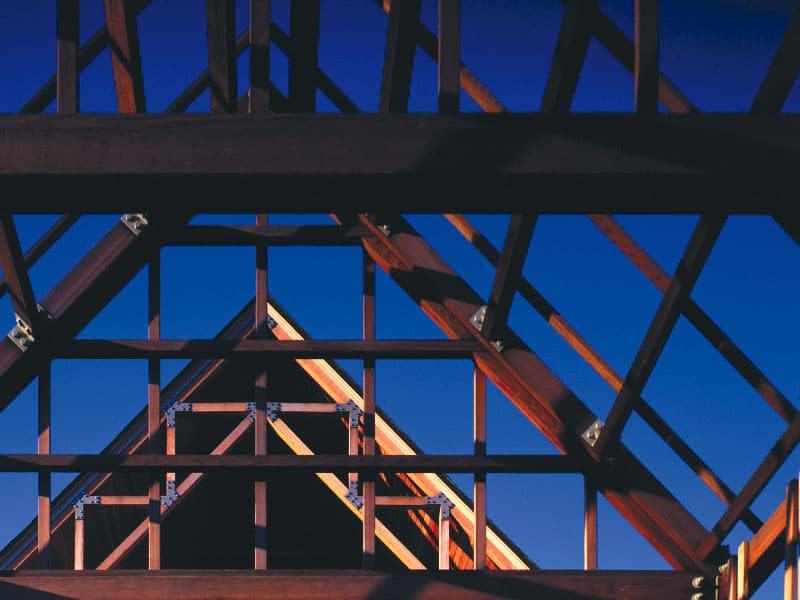